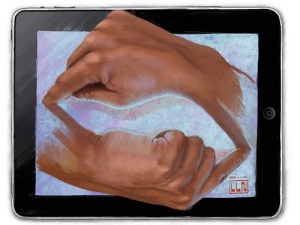 She built four patterns, taking a photo each time she added a piece. Then, she created a video which I dragged into iMovie. Finally, I recorded her as she talked about her patterns. The movie would be better if the audio were synced to the video, but I wanted to see what we could create in ten minutes. Here it is:

These student-created movies could be used by classroom teachers to assess what students are able to do. There are nine mathematics learning outcomes in the BC Kindergarten IRP. One addresses Patterns:

In Grade 1, two small changes are made to B1 and a second PLO is added:

B2 translate repeating patterns from one representation to another [C, R, V]

What judgements could you make about my daughter’s performance in relation to the prescribed learning outcomes? A rhetorical question – I’m not expecting or even wanting a reply.

My daughter also told me that sometimes shape and size can be used to describe patterns (e.g., “circle, circle, square, circle, circle, square” or “small, big, small, big”). Our movie doesn’t demonstrate this knowledge. This speaks to the importance of having conversations with our students – from Kintergarten to Calculus.