This summer, Marc and I made several videos designed to help parents understand what mathematics their children are learning. As well, we wanted to give parents a feel for how their children are learning in their math classes. We added Mathematics 6 & 7 videos to the previous summer’s 8 & 9 collection. The work of producing videos for Foundations of Mathematics and Pre-calculus 10 is well underway; I expect to add two more videos–Solving Systems of Linear Equations Graphically & Algebraically–this week. Although intended for parents, we believe that this series could be a helpful resource for teachers, especially those having to teach in an online or blended environment due to COVID-19.

In this post, I’ll share some of the principles that guided us when creating the videos. This’ll be a peek behind the curtain of interest more to educators than to parents.

Math is visual. Videos are visual. So math videos should be visual. It is disappointing how often makers of digital content fail to take full advantage of visual aspects available to them. The animation of symbolic representations–line-by-line equation solving or drawing little arrows to show the distributive property–should not be the extent to which content is presented visually. It’s ballsy to sell this to educators as visual if that’s all you’ve got. By “make it visual,” I mean include images and animations that help viewers make sense of the mathematics at hand or the context in which the mathematics is situated. For example, we show that 2:3 is equivalent to 8:12 by repeatedly extending a black-red-red-red-black pattern of beads; we don’t describe two candles with different heights and different rates at which they burn, we show it–so long as we can figure out how to do it in Keynote.

I once watched a short video to fix an issue with my dishwasher. I carefully followed the directions, pausing the video at each step along the way. But no one is ever going to mistake me for a handyman! I don’t really understand how dishwashers work. I couldn’t connect the problem to any knowledge of the machine’s mechanical or electrical systems. If the solution shared online didn’t work, I was hooped. And even though I was successful, my procedure for fixing my dishwasher was useless for fixing my washing machine, let alone a different make and model of dishwasher. This skill–long-forgotten, by the way–didn’t transfer from one household appliance to another.

But it didn’t matter. I set out that morning to make one small repair, not become an appliance repair technician. Mathematics is different. The emphasis in math class must be on sense-making, not answer-getting. The same should be true of math videos. In our videos, we attempt to always address the why.

For example, we answer “Why is a negative divided by a negative a positive?” by revisiting what it means to divide whole numbers and then applying these two fundamental meanings to dividing integers. Later, a thermometer example reinforces dividing as measuring.

Conceptual understanding means seeing mathematics as a coherent whole rather than isolated procedures. Digital content can support students in developing conceptual understanding by creating opportunities for them to connect models and representations. For example, we ask learners to connect multiplying binomials to what they already know about multiplying two-digit numbers (i.e., an area model, partial products, the distributive property).

For example, percents are presented as fanatical comparisons to 100. No part-whole-percent triangles or is-over-of-equals-percent-over-100 cross-products here. Relating percents to decimals does not appear until grade 7. So, in our Mathematics 6 video, the emphasis is on equivalency and benchmark percents (i.e., 50%, 25%, 75%; 10%, 20%, … , 90%).

Procedural fluency includes the ability to apply procedures flexibly. Throughout each video, multiple strategies are discussed. For example, see the strategies–and representations–used in this proportional pizza problem.

To bridge conceptual understanding and procedural fluency, we try to build on learners’ own mathematical ideas. For example, before the elimination method for solving systems of linear equations is introduced, viewers are first encouraged to solve a puzzle using their intuition. Then, they are presented with a pictorial representation of a solution to a problem. It’s at this time that algebraic symbols and notation appear:

This process plays out when solving equations in one variable (boxes of doughnuts; algebra tiles) in Math 7 and when solving systems using substitution (scale puzzle; two types of tickets problem) in Math 10.

Of course, we can build on viewers’ own ideas only to the extent to which they engage with and participate in the learning experiences that we design. This segues into our last principle…

I think that this is the right adjective. To me, inviting goes beyond accessible.

One way in which we make an effort to invite parents to “do the math” is to use open questions. Sometimes, this means open-ended. For example, Show me one-quarter in as many ways as you can, What could the numbers be? and What comparisons can you make? (and later What is being compared in the ratio 1:2?) are open-ended; they allow for many correct answers and signal that a range of responses are valued.

Other times, we used open middle problems. An open middle problem may have one correct answer but multiple ways of getting it. For example, there is an arrangement–or two–of number tiles that maximizes the expression below. The animated placement of the number tiles is meant to model one strategy and includes me making missteps and backtracking as I went along.

(Here’s a number tile factoring task from Math 10 that has both an open end and an open middle.)

In addition to openness, we try to hold off on introducing formal symbols and notation early. For example, Two numbers add to 12. What could they be? comes before Solve the system x + y = 12 & y = 2x. (See also Burgers, Fries, and Cokes and Tees and Hoodies above.)

Sometimes, when a task is not a soft place to start, we may still present it up front and then return to it later, after we’ve built up some knowledge. In this way, we hope to “make it inviting” by piquing the curiosity of viewers. For example, asking parents to pick two numbers that differ by two and multiply them is accessible whereas asking them to explain why this product is one less than the square of the number between them is not. A similar approach was taken with a gas vs. electric vehicle application of linear systems; it serves as a hook in the video’s introduction.

We believe that learners of mathematics should be active participants rather than passive spectators. There’s a tension between this belief and video. In our videos, we put a lot of trust in parents pressing pause when prompted. It’s in these moments that they “do” math, that they play, notice and wonder, solve problems, visualize, look for patterns, make conjectures, generalize, reason, explain, connect ideas, take risks, etc. We were limited by the medium–or our tech skills within this medium.

In a mathematics classroom–be it face-to-face or remote–this tension can be resolved. And this is one reason why we’re just as, if not more, excited about teachers using these videos. At the moments when we ask viewers to pause, students could be placed in visibly random groups or breakout rooms. Teachers are not limited by our prompts–or these moments. They can observe and adapt to what’s happening with their learners in the moment and ask How else might you have solved the problem/represented your thinking? What does this remind you of? How are these the same? How are they different? What would happen if… ? etc. There’s no need to “fake it” coming out of a pause as we had to do (e.g., “You might have noticed that…”).

These videos were intended to capture the big ideas or enduring understandings or key concepts of a topic–a whole chapter or unit. Although each clocks in at about twenty minutes, it would be inappropriate to have students experience an entire video in one sitting. Instead, a task or two clipped from a downloaded video could make up one day’s learning experience.

If you find this video series helpful, we’d love to hear from you. Drop a comment, question, or complaint in the comments.

In June, a colleague invited me into his classroom to teach a Desmos modelling task — Predicting Movie Ticket Prices — in his Math 12 class. Students experienced exponential functions earlier in the course. We were curious about whether his students would apply what they knew about exponential functions to a task situated outside of an exponential functions unit — a task not having to do with textbook contexts of half-life, bacteria, or compound interest. They did. And they deepened their understanding of how change by a common ratio appears in exponential equations (vs. change by a common difference in linear equations). They did this within 45 minutes of a 75-minute class. So my colleague let me try out another, less sexy, task — one adapted from MARS. This task, like much of Math 12, is about naked functions; no real-world context here. Nat Banting’s closing keynote at #NWmath reminded me of it. Watch Nat’s talk; view his slides. 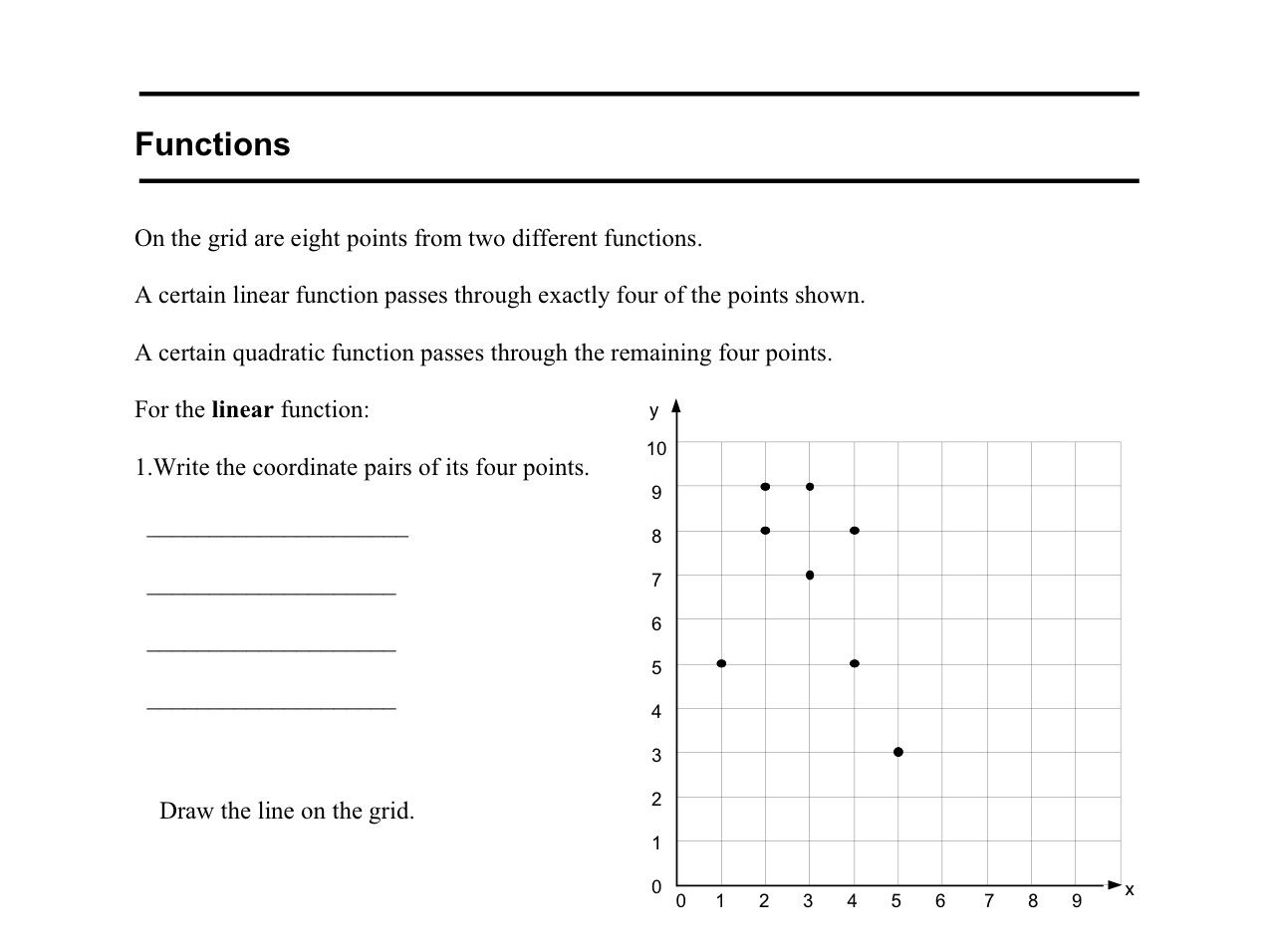 The original MARS task above is closed: two functions, one linear and one quadratic, each passing through four points. I wanted to open it up so I changed the prompt: “A set of functions pass through the points shown. What could the equations for the functions be?” Also, I removed one of the points — (5, 3) — to allow for different solutions of two functions. The thinking is that open questions encourage a variety of approaches. And then, from fifteen pairs of students: 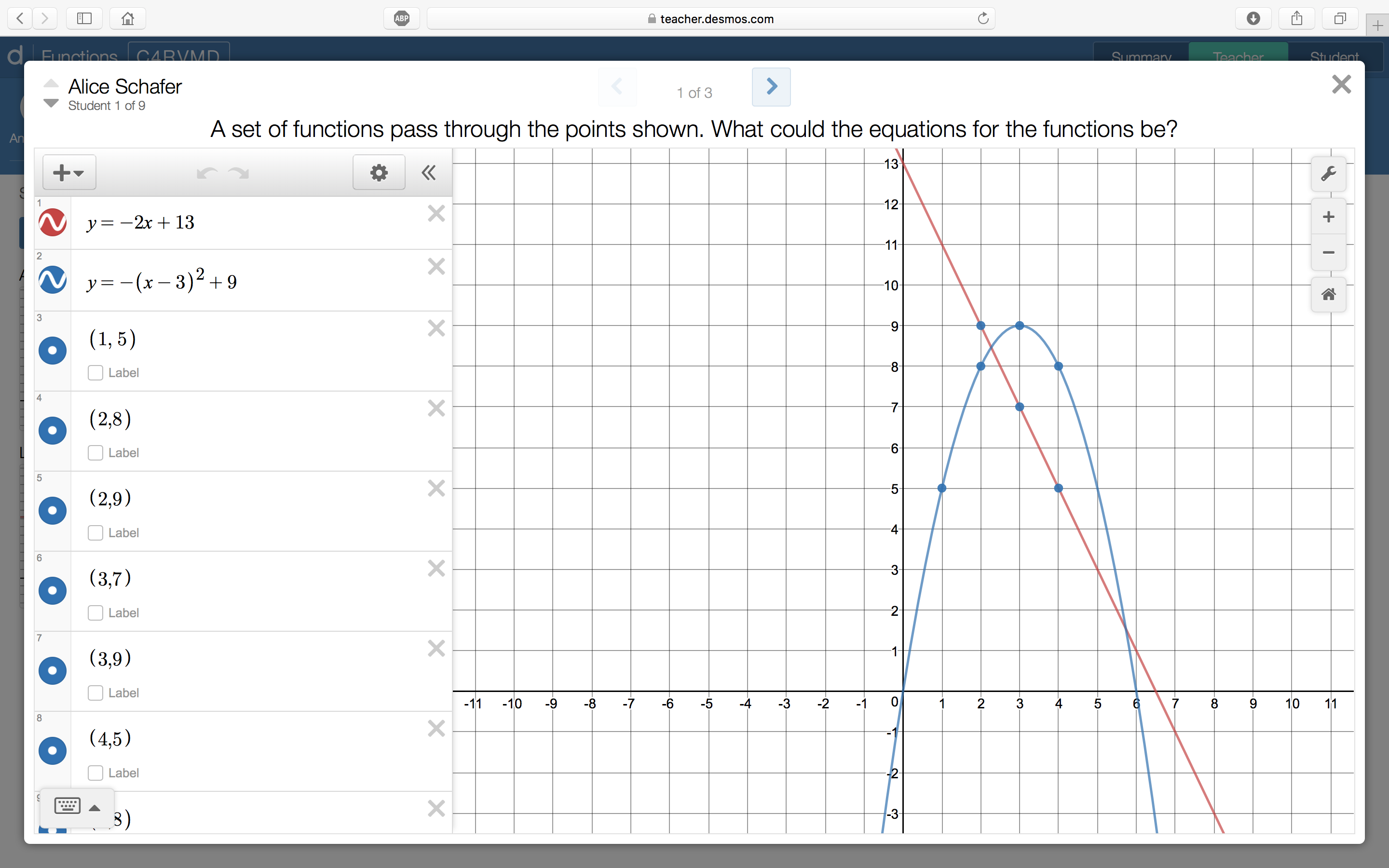 I anticipated this. The points scream linear and quadratic. They are sources of coherence. I had lowered the floor but no Rileys entered y = 5, y = 7, y = 8, y = 9. The problem wasn’t problematic. I had raised the ceiling but no one wrestled with equations for sinusoidal or polynomial or radical or rational functions. The freedom within my open question didn’t bring about new and diverse ideas. To support creativity — mathematical creativity! — I had to introduce a source of disruption, a constraint: “A set of nonlinear functions pass through the points shown. What could the equations for the functions be?”

A student could have used the linear nature of absolute value functions to get around my nonlinear constraint — a bit of a Riley move? — but no one did.

Instead, some students picked up on the symmetry of two new possible parabolas:

Writing the equation of the second parabola — finding the parameters a and q — presented more of a problem.

Others bent the line; they saw the middle of its three points as the vertex of a cubic function that had been vertically stretched and reflected: 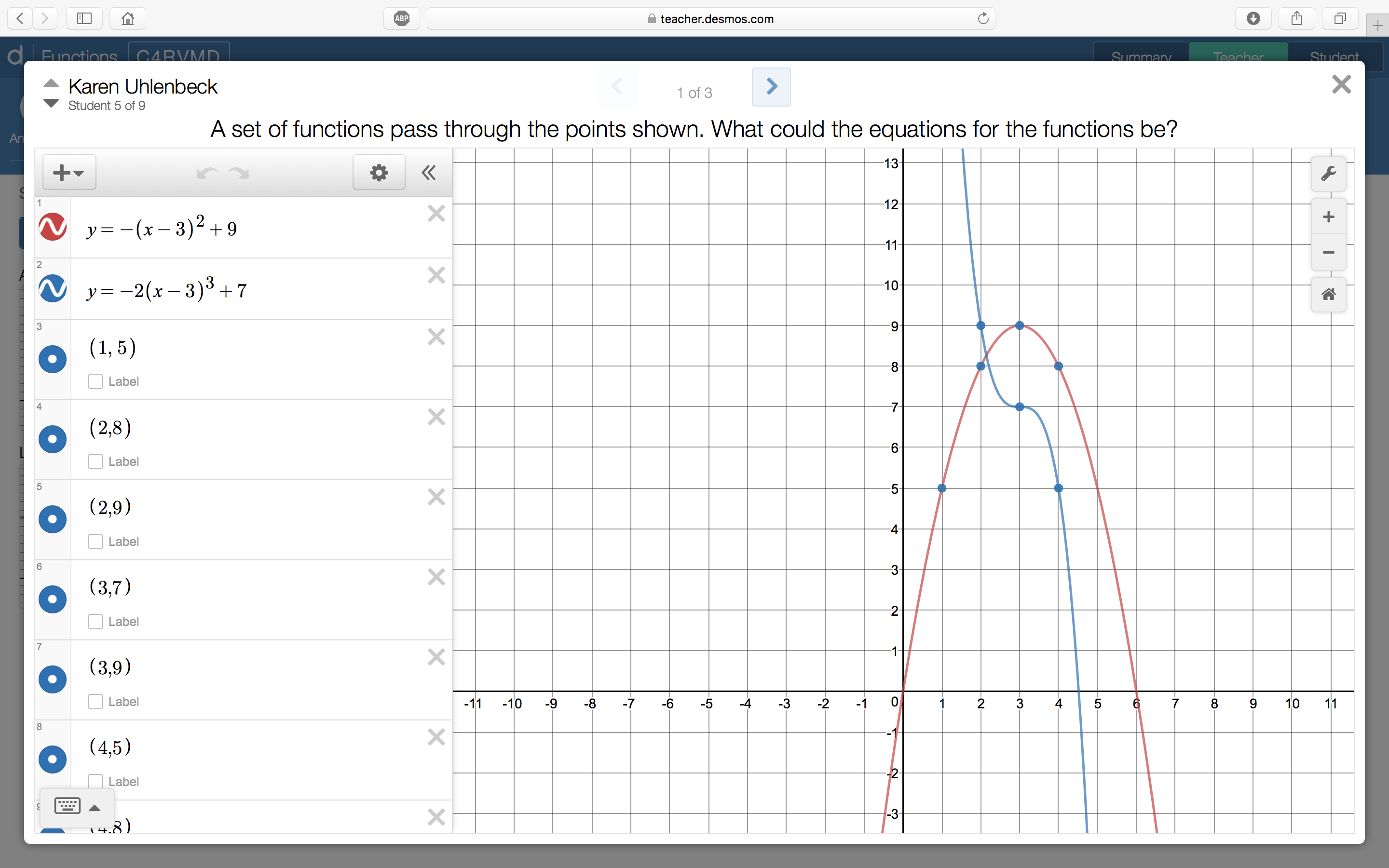 Some saw four compass points and wrote an equation of a circle. This led to a function vs. not a function conversation: “Does that count?” Others saw a sine function that passed through three of these four points. There were “close enough” solutions — great for Coin Capture but not quite passing through the given points:

I didn’t anticipate this. Students weren’t as constrained by “pass through” as I was. Also, they were motivated to capture the points using only two functions, as before.

With more time, I could have shifted constraints again: “A set of functions pass through the points shown. What could the equations for the functions be? (P.S. The graph of at least one of them has an asymptote.)” This would have triggered exponential and logarithmic or rational functions. (Even without introducing this constraint, we noticed at least one student playing with rational functions at the end of class.)

Above, there’s evidence to support Nat’s #NWmath conjecture: “Shifting constraints triggered new mathematical possibilities.” My (more) open question didn’t cut it. The student thinking — and conversations — that I had hoped for only emerged when freedom “sloshed against” constraints.