One of my favourite read alouds is One Is a Snail, Ten Is a Crab. In April Pulley Sayre’s “counting by feet book,” one is a snail, two is a person, four is a dog, six is an insect, eight is a spider, and ten is a crab. 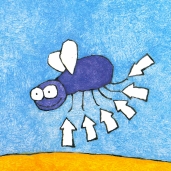 The odd numbers to nine and multiples of ten to one-hundred are represented as combinations of animal feet. For example, three is a person and a snail; ninety is nine crabs or ten spiders and a crab.

Last week, Sandra and I visited a Grade 1 classroom in which we asked “How many different ways can you make ten?” Children read a number sentence (e.g., “six and four make ten”) to go with each of their drawings. Some students built the animals using muli-link cubes. Some students wrote addition equations (e.g., 6 + 4 = 10). There were multiple approaches to solving this problem. For example, this student skip counted by twos (I think).

These solutions reflect an understanding of “ten-ness.” These students are not (just) counting feet. Gotta be the ten-frames.

It is important to provide opportunities for children to think about numbers as compositions of other numbers. Breaking up numbers, into tens and ones or in other ways, makes computations easier in later grades.

Thanks to Ms. Long and the young mathematicians at Fraser Wood Elementary for inviting us into your classroom. Also, thanks to Pete Nuij and Lesley Tokawa for helping make this happen.