This week, the Vancouver Public Library is offering amnesty on long overdue fines. Readers with overdue fines stay away from libraries. The VPL wants them — patrons and their books — back.

Last year, someone dropped off a vinyl record at the VPL that was due in 1952. I wonder, “How much would have been accumulated in fines?”

Instead, assuming the percentage increase is constant, an exponential function can be used (to approximate a step function). Solving 0.25 = 0.02*e^(r*41) for r gives r = 0.0616. Integrals, like overdue fines, have to do with change and the accumulation of change.

Does the following calculation give the total amount accumulated in fines? My calculus is rusty. 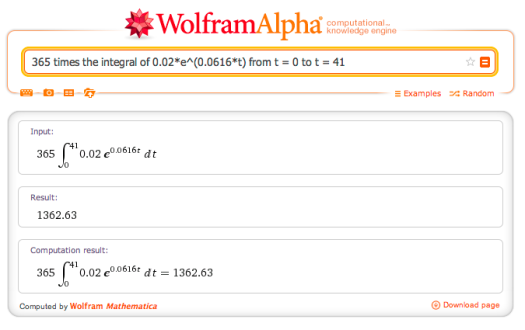 Also this year, “Fire of Francis Xavier” — along with a cheque for $100 — was returned 55 years late to the New York Public Library. How much should he have enclosed?

The start of a three-act task for Calculus, maybe? (Note: Click the links above to watch the news stories from Vancouver and New York.)

In the “real world,” overdue fines at the VPL max out after 42 days, or $10.50, at which time the book is regarded as lost and replacement fees and handling fees kick in. Once again, the “real world” is less interesting than asking “What if?”