Occasionally, I am asked if I know of any virtual math manipulatives. “I do. Why?” I reply.

I have a tough time with this type of app. Wanna know what make excellent pattern blocks? These: 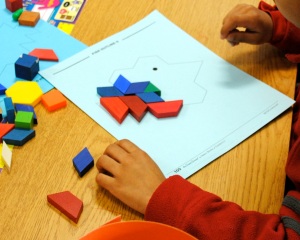 Geoboard has softened my position on virtual manipulatives. Last week, as part of an investigation (Pick’s theorem), we asked teachers to figure out the area of the shape below (from Marian Small).

Teachers calculated the area in a variety of ways. Filling shapes with colour in Geoboard helps illustrate each strategy. Most groups divided this shape into a rectangles and two triangles, used the formulas for the area of a rectangle and a triangle, and calculated the sum.

Some groups emphasized the relationship between rectangles and triangles. 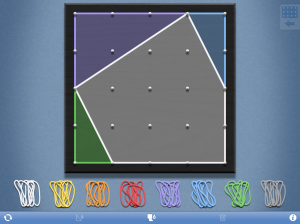 Many groups counted squares and visualized pieces being rearranged to create new squares.

The use of geoboards (real ones) led to answers of “approximately eleven.” With the elastic bands having to wrap around the pegs, the relationships between partial squares were more difficult to see. Similarly, in the investigation of Pick’s theorem, it was sometimes difficult to tell whether a lattice point was a border point. It’s not an issue within the iPad app; the virtual elastic bands connect rather than wrap around the virtual pegs. Plus, working with virtual bands was easier than working with real bands. This encourages even more “what if?” thinking. I don’t think this is true of all virtual manipulatives.

More importantly, learners can share their solutions through an AppleTV. This can also be accomplished with real manipulatives and the iPad’s built-in camera. True, students can push, pull, or drag their real geoboards to the front of the class to show and share their solutions, but technology just makes this seamless.

While I may have warmed up to virtual manipulatives, don’t expect me to warm up to virtual flashcards any time soon. Some teaching practices are harmful to students. Retina display doesn’t change that.

Last week, we wrapped up our winter sessions with over 50 elementary school math teams. Part of these sessions are devoted to having teachers work together to solve problems. Having teachers “do the math” helps brings meaning to important topics in mathematics education. We gave the following problem, from Van de Walle:

In a particular small town, 2/3 of the men are married to 3/5 of the women. What fraction of the entire population are married?

This is a challenging problem, but only because traditional algorithms get in the way of sense-making methods. The gut reaction is to do something with common denominators. Time after time, with each group, primary and intermediate. Through questioning, the mistake can be recognized.

Sometimes, it takes longer to reach an ‘OOOOOh’:

Once teachers realize that having 10 men married to 9 women is somewhat problematic, most model the problem using colour tiles. Two out of three men being married becomes four out of six and six out of nine. Three out of five women being married is equivalent to six out of ten. Six pairs of husbands and wives can be formed. We have 12 out of 19 people being married. 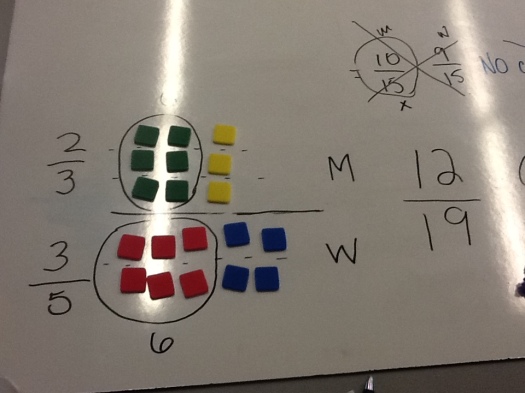 The use of manipulatives to construct meaning continues to be a focus of teachers involved in the numeracy project, both for themselves and for their students. Long before I became involved in this project, my fellow Numeracy Helping Teachers (Marc Garneau, Selina Millar, Sandra Ball, and Shelagh Lim) worked tirelessly to set a climate in which teachers and students felt comfortable using a variety of manipulatives.

At these sessions, we present teachers with problems, not practice. It’s a pleasure to work with such an amazing group of educators so willing to explore, take risks, and persevere. But as much fun as these sessions with teachers have been, I’m looking forward to the real fun: problem-solving with their students.

Person A (thinks he) has a lot to say. He likes to talk. He needs to talk. You can’t ignore Person A. He won’t let you.

Participant are divided into groups of four. Group members number themselves from 1 to 4.

Participants are reorganized into four groups according to question number. Those who asked the same question gather together to share their findings.

Finally, everyone hears the summaries of the four questions from each of the four groups.

I chose four themes rather than four questions. Question 1, for example, is actually made up of three questions. It is not necessary for participants to answer all three. Hopefully, at least one of them is of interest to the person being interviewed.

The word community is used in 3 of the 4 questions. It was interesting that groups interpreted this differently– community of teachers on staff, community of learners in the classroom, community of parents. This was deliberate on my part.

I’ve used this activity with three different groups and each time the participants have enjoyed it. Some math team mentors have taken this activity back to their schools to generate discussions.

One word of caution… at last, everyone gets to hear what that guy with the stack of marking has to say.

One problem… we did not all agree. “Actually…” I began my reply.

His statement was something like this: “…our primary role/responsibility is to make math easier for students by efficiently providing them with clear and concise explanations.”

There was a time in my career when I might have agreed with him. In fact, I probably spent the first ten years of my career striving to get better at exactly that. And, over time, my explanations did get better. I took pride in my ability to deliver content in bite-sized easy to digest pieces. This ability defined me as a teacher.

Simultaneously, I was growing more uncomfortable with this. I felt like I was teaching punctuation when, really, I wanted to be teaching literature. If I wanted my students to think mathematically, persevere in solving problems, appreciate mathematics, etc. my belief about my role had to change. In short, I had to “be less helpful.” I had to let go of what I had worked so hard to accomplish.

Back to that conversation at the school… here we were discussing the effectiveness of a particular problem-based lesson while holding opposing beliefs about what it means to teach.

Lately, I’ve been thinking  about ways to bring forward these beliefs. I created an activity and tried it out over the last two days with two groups of math team mentors and administrators. The gist of it:

Teachers enjoyed the activity and I enjoyed eavesdropping on some thoughtful conversations. Each belief statement was inspired by actual comments that I have heard in the last two years. For what it’s worth, two of the statements (I won’t tell you which two) were taken directly from the WNCP Mathematics K-7 Integrated Resource Package and educators placed these statements, unedited, on the far right.

Below are some examples of how teachers rewrote statements so that they felt right– from the gut.

There are three types of people: mathy people and non-mathy people.
became
All students are capable of learning mathematics. Mathematical thinkers are created, not born.

(Okay, I served up a softball.)

Ha! BTW, other groups focused on the importance of having flexible strategies.

And check this out:

Of course, it’s not enough to believe. There’s also the challenge of putting these beliefs into practice. But that, I think we can all agree, is a different conversation.

This week, we spent one day with 15 math teams (almost 50 teachers and administrators) from 15 elementary schools in Surrey. (I’ll blog about this project soon.) Part of this day was  devoted to having teachers work together to solve problems. These problems help set the stage for some of the important themes schools will be exploring by participating in this project over three years. These include:

We gave the following problem, from Figure This!:

Take two identical sheets of paper (8½ inches by 11 inches). Roll one sheet into a short cylinder and the other into a tall cylinder. Does one hold more than the other? 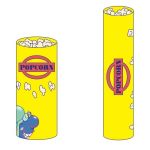 A common misconception is that the two cylinders hold the same because the two pieces of paper are the same size. Teachers use a variety of strategies to explore the relationship between surface area and volume.

The first approach most teams take is to calculate the volume of each cylinder. They’ll ask for (or google!) formulas. Even after determining the volume of each cylinder, many will remain unconvinced. Prompted with “How might young children solve this?” teachers will fill each cylinder with manipulatives available at their tables and compare the results, similar to the third act of Dan Meyer’s Popcorn Picker or John Scammell’s Surface Area vs. Volume.

One of the things that I enjoy most about posing these problems to teachers is that each time someone will come up with a solution that I haven’t seen before. For example, this week one team solved this problem by solving a simpler problem. That is, they compared rectangular prisms. (Is ‘squarular prism’ a thing? It should be.)

They argued that the conclusion would be the same but the calculations would be easier. They found a way around the formulas V = πr²h and C = 2πr. True problem-solving!

Part of me geeks out at seeing innovative solutions. The other part of me kicks himself for not making this a bigger part of my own classroom. A lot of missed opportunities– maybe one day I’ll get a do-over.