“Alright, let’s get to today’s duel. For today’s duel you’re gonna race across a balance beam, collecting bags of numbered tiles. You must then place the tiles in order, one to one hundred.”

(Aside: If there are three opponents, is it still called a duel?)

The reaction online was swift and harsh:

“It is seriously the most idiot-proof puzzle in the history of puzzles. You basically have to know how to count and that’s pretty much it.” (source)

But that’s not pretty much it. I mean, it is counting from one to one hundred (and that is how the contestants solved the “puzzle”), but it could be more than that. A better strategy involves comparing numbers, understanding place value, and identifying patterns found in tables.

A literal translation of “You gotta put ’em in order”? Each competitor places 25 only after placing 24. Then, he/she tries to find 26 in his/her pile o’ tiles. Some tiles are facing down. Suppose a player turns over a tile and finds 28 rather than 26. He or she should take advantage of another pattern and place it under 18.

He could have caught John if he had an understanding of place value. Suppose Brad turns over 94 before finding 87. Should he drop 94 and continue looking for 87 or just place 94 in the 9th row (9 tens) and 4th column (4 ones)?

This challenge reminds me of an activity I’ve used in Grade 3 classrooms. Take some 100 charts. Cut each chart into “puzzle” pieces. Place in a Ziploc bag. In pairs, have students reassemble. Ask students to describe how they solved their puzzle. This activity is much more engaging (and puzzling) than it has a right to be. 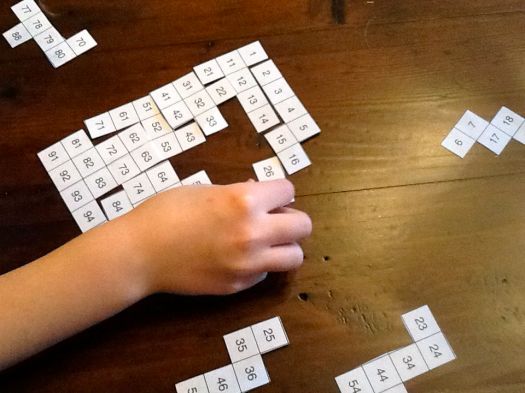 Don’t be surprised if you see some completed 100 charts that look like this: