Recently, I was invited into three Grade 3/4 classrooms to introduce fractions.

Cuisenaire rods give children hands-on ways to explore the meaning of fractions. After students built their towers, flowers, and robots, I asked, “If the orange rod is the whole, which rod is one half?” Students explained their thinking: “two yellows make an orange.” I emphasized, or rather, students emphasized that the two parts must be equal.

I asked students to find as many pairs as they could that showed one half. I let ’em go and they built and recorded the following: 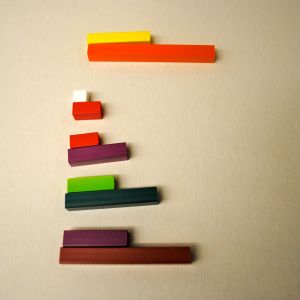 Once more, with one third: 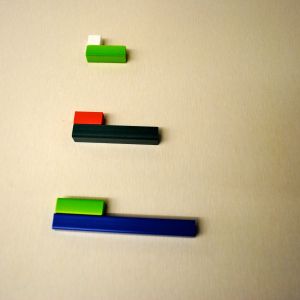 As children shared their pairs, we discussed the big ideas:

Something interesting and outside the lesson plan happened in each of these three classrooms.

I asked the “we’re done” students to represent their own fractions using pairs of rods and determine each other’s mystery fraction. Many students chose fractions like 2/5 or 3/4, not simply unit fractions:

After students shared the three pairs of rods for one third, I asked if anyone found any more. “I did,” said one student, unexpectedly. Check this out:

I asked her why she chose to combine an orange rod and a red rod to make the whole. She explained that twelve can be divided into three equal parts. Without prompting, the rest of the class starting building these:

adapted from The Super Source